Click on a picture for current status and more info.

Approximately 650 Model A Duesenbergs were produced from 1921 to 1926. They were priced at an average cost of $7,500 which was a considerable sum of money at a time when a Model T Ford could be purchased for around $500. The Model A Duesenberg was the first automobile in series production to have hydraulic brakes and the first automobile in series production in the United States with a straight eight engine.

The bodies of most early Duesenbergs were constructed of heavy gauge aluminum which explains why they have remained in such remarkable condition even when left to the elements for many decades. Approximately 35 different Model A Duesenberg body types are known to have survived to date. All were built separately by different body builders. This particular Duesenberg was discovered in a junkyard in Long Island, New York in the early sixties and it has remained in storage in Rochester, New York until January 2021 when Dick Shappy purchased it with intentions to bring it back to running in its original splendor.

We have discovered that many of the parts that were promised with this car have not yet arrived as agreed. A vigorous attempt to retrieve all the original parts is currently underway. You are invited to follow this aspect of the restoration while we embark on the restoration of this extremely rare and fine gem of automobile history.
Click here to see restoration photos

In mid September 2019, I was contacted by a friend who said he had knowledge of a Wold War 1 airplane engine that he believed is a Curtiss which was built by Glenn Curtiss of Hammondsport, New York. He was told that I might be interested in purchasing this engine as he knew that I had already restored two Curtiss-built motorcycles, a 1901 Hercules and a 1909 Curtiss Twin. He also heard a rumor that I was interested in building an aero engined race car. Well, he was right on both presumptions. I asked that he send more info such as location, condition, availability, and, of course, price. The first photo shown in the album for this car piqued my interest and eventually led to the purchase and the ensuing project.

The following is excerpted from the Smithsonian Air and Space Museum:
The most successful early engines marketed in the United States were those built by early aviation pioneer Glen Curtiss of Hammondsport, New York. The first aircraft engines that Curtiss designed and built were air cooled as were his early motorcycle engines. But to achieve higher power, he produced liquid cooled engines beginning in 1911 with his OX-5 engines. With the advent of WW1, the United States contracted Curtiss to produce engines to power the JN-4D "Jenny" trainer aircraft. He later produced an improved version of the OX-5 with the OXX-6 engine. The improvements included an additional magneto for greater dependability and a slightly larger engine bore which produced an additional ten horsepower which gave the OXX-6 a rating of one hundred horsepower. By todays standards, 100 horsepower may not sound extremely powerful but compared to the very powerful 77 horsepower engines that powered Cadillac cars in 1917, the OXX-6 was considered extremely powerful and they were the most extensively used American built engines during WW1 and in the following decade.
Click here to see restoration photos

Produced in Logansport, Indiana, this 4 cylinder "Walking Beam" Duesenberg engine is rated at 100HP on a 131 inch wheel base. Production of ReVere automobiles was very limited with only six produced in 1918, fifty in 1919, fortythree in 1920, twentyseven in 1921 and only 121 cars produced over the next five years. Production ended in 1926. Here Wray Schelin (l) and Dick Shappy pose with the 1918 ReVere Duesenberg Racer at the Pro Shaper garage in Charlton, Massachusetts December 23, 2016.
Click here to see restoration photos

The Veterans Square Diner opened in West Warwick, Rhode Island in 1941 and was operated for more than fifty years by the Richter family until it was abandoned and discovered by Richard Shappy. Prior to its use as a diner, it had been an Osgood Bradley Trolley operating on the streets of Providence and surrounding cities for approximately thirty years. As many as fifty trolley cars had plied the streets of Providence and they were thought to be extinct until Shappy's discovery.

A meticulous restoration has been underway since 2006. See how new life is restored to this faded old lady of the streets.
Click here to see restoration photos

For the past three years, Dick Shappy and Sean Brayton have been restoring one of the earliest known surviving examples of this rare and beautiful little piece of Americana.

This project has an article associated with it. You can find it here.
Click here to see restoration photos

The National Car Company produced their cars in Indianapolis, Indiana. The present day Indianapolis Speedway began as the factory proving grounds for these extraordinary fine high-quality racing machines. In 1911 alone, National placed a total of 162 1st, 2nd or 3rd place finishes, and won World Stock Champion, World Road Race Champion, World's Fastest Straitaway Mile, and Long Distance Champion honors. A factory brochure quoted the following, "The fame of this car has circled the globe because of its multiplied (sic) demonstrations of absolute reliability, speed, and perfect satisfaction." We are currently restoring one of the very few remaining examples of this very rare and treasured automobile.
Click here to see restoration photos

The newly found Duesenberg J Convertible Sedan stirred up a lot of interest since the story of its acquisition appeared in the March 3rd 2005 issue of Old Cars Weekly Vol.34, No.9. Because of the interest that article generated, we are showing our web site visitors how nicely the restoration is proceeding. Detailed information is posted as the work is completed.
Click here to see restoration photos

Model 452A 16 cylinder 452 cubic inch engine model 4380 convertible sedan. Also known as "all weather phaeton". Two hundred and fiftyeight of these magnificent autobiles were produced in 1930-1931. No expense was spared in the meticulously completed restoration of this vehicle.
Click here to see restoration photos

This car was purchased in 2002 from Steve Grisbee of Cheyenne Wyoming, and it has undergone a complete show-quality body-off restoration that took seven years to complete. Although several of these Demi Tonneau cars have been restored at our facility, the one pictured here started off as the best original example that we had ever seen. With the restoration finally complete,we feel that it is the highest quality example of 1911 Cadillac Demi Tonneau available on the market today.
Click here to see restoration photos

After a lengthy six-year restoration, we sold this vehicle at auction. But we loved it so much, we bought back the following year.
Click here to see restoration photos

A seven year complete body off restoration was completed in November 2018 on this car with no expense spared. The photos in this album document that restoration.
Click here to see restoration photos

The following is from a 1912 Thor sales brochure:

"This new big 7 horsepower White Twin is the most powerful motorcycle yet known, with unlimited speed. It will be the boss of the road and the pride of the boulevard."

"Its exceptionally beautiful appearance will appeal to the thousands of riders who enjoy long trips and pride themselves on their neat appearance when touring."

"Several of the most noted gasoline experts in the United States have pronounced this new 7 H. P. Twin Cylinder Motor to be positively the most mechanically perfect internal combustion engine of the age."

In April of 2009, Dick visited the Horseless Carriage sponsored event that is held annually in Bakersfield, California. While looking for spares for the many pre-war era cars that Dick is restoring, he noticed six vintage motorcycles displayed for sale on an open trailer. Dick began negotiating for the purchase of the 1912 Yale 7P Twin and a 1912 Emblem Twin. No deal was made at that time with the gentleman who owned them, but Dick was definitely interested. After doing a little more research on both machines, Dick learned that the 1912 Yale Twin was the biggest and fastest produced at the time and was, indeed, the most desirable Yale of that year. A few weeks later, Dick ran in to the same gentleman at the meet in Oley, Pennsylvania. Both motorcycles were still available. A deal was made, and, here below, you will see a detailed accounting of the restoration of the beautiful 1912 Yale motorcycle.
Click here to see restoration photos

On October 21st 2006, Dick Shappy attended the Otis Chandler auction in Oxnard, California. His main purpose for attending this auction was to purchase the 1911 Flying Merkel 50-50 V-Twin motorcycle.

After being outbid, Dick soon bought a "basket case" version of the same model, and is now restoring it.

This project has an article associated with it. You can find it here.

This car was purchased several years ago from the Dragone collection. Most of the correct parts for it have been found and are being fitted, after which, the project will be disassembled. Paint work, bright work, upholstery, et cetera will be finished, and the car will be reassembled.
Click here to see restoration photos

This four foot by four foot section of "burly red wood" was recently purchased, and it will be used on the interior doors, dash, and rear seat face. Expert wood craftsman, Bob Dwyer, is posing with the red wood section.
Click here to see restoration photos

In 1909, Percy Pierce introduced a four cylinder motorcycle similar to the Belgian-built FN. The quality was very impressive, and so was the price -- $400.00 which was a staggering amount of money for that period. In 1910, a two-speed clutch and transmission were added at an even higher price. Sales were low and production ceased in 1913. The Pierce Arrow register lists only fifteen of these machines as surviving today. We are very proud and privileged to be restoring the one listed here.
Click here to see restoration photos

We have begun a "ground up" restoration of this 1917 Indian twin. We also have two other PowerPlus cycles ready for restoration when this one is completed.
Click here to see restoration photos

In 1998, Dick Shappy began the restoration of this rare (only one) and desirable automobile. It won "Best of Show" on Father's Day, July 5, 2005, at the New England Cadillac LaSalle show at the Portsmouth Abbey in Portsmouth, Rhode Island.
Click here to see restoration photos

Merkels were produced from 1902 to 1916 and are highly collectible and are considered to be tops in reliability, speed, and performance for that era. The sales price of $305.00 in 1914 slowed production as the sale price of a Model T Ford had dropped to only $345.00.
Click here to see restoration photos

Listed as the only existing Type 51 Landaulet in the Cadillac-LaSalle Club directory.
Click here to see restoration photos

If you were the richest girl in the world and were given the opportunity to have a custom car designed and built for you, what would you have built? Miss Doris Duke (Nov. 22, 1912 -- Oct. 28, 1993), the tobacco heiress, was born in 1912 and, in 1937 at age twenty-five, she visited the Rollston body company in New York City where she commissioned those prestigious body builders to produce her dream car.

She was chauffeured many times from her estate at Duke Farms in Hillsborough, New Jersey to her mansion at Rough Point in Newport, Rhode Island in this beautiful 1938 V-12 Packard Landaulet by Rollston.

In 2007, Dick Shappy found the car in need of total restoration. Click on the photo to see us document the meticulous restoration process that this "one off" custom beauty underwent.
Click here to see restoration photos 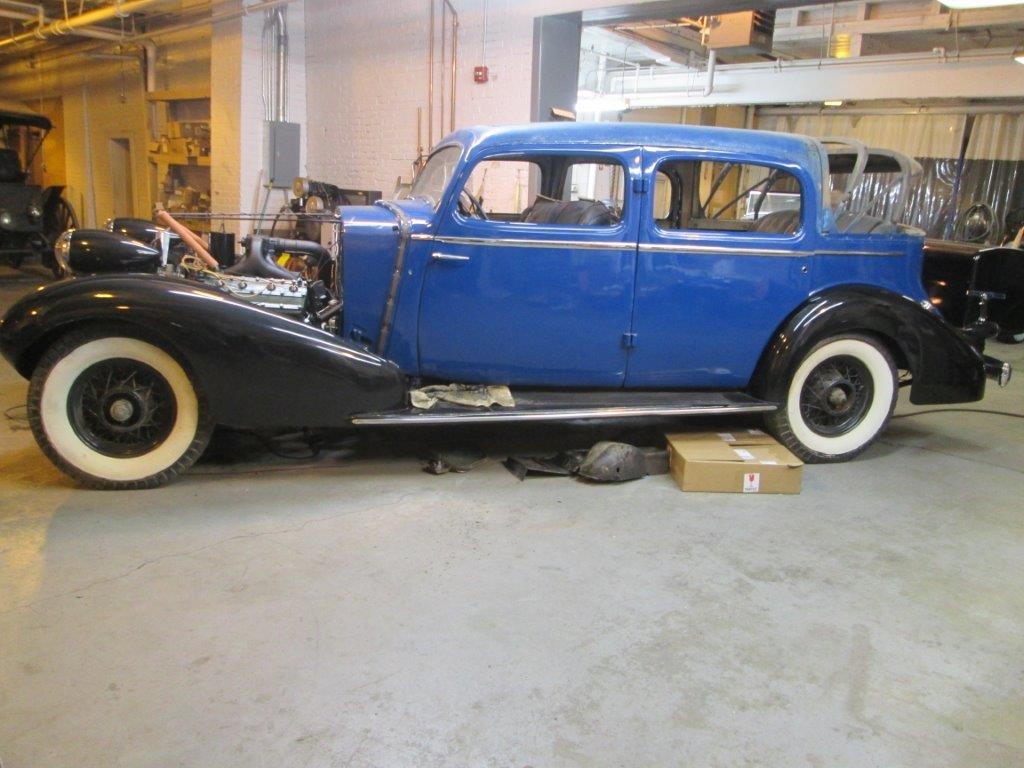